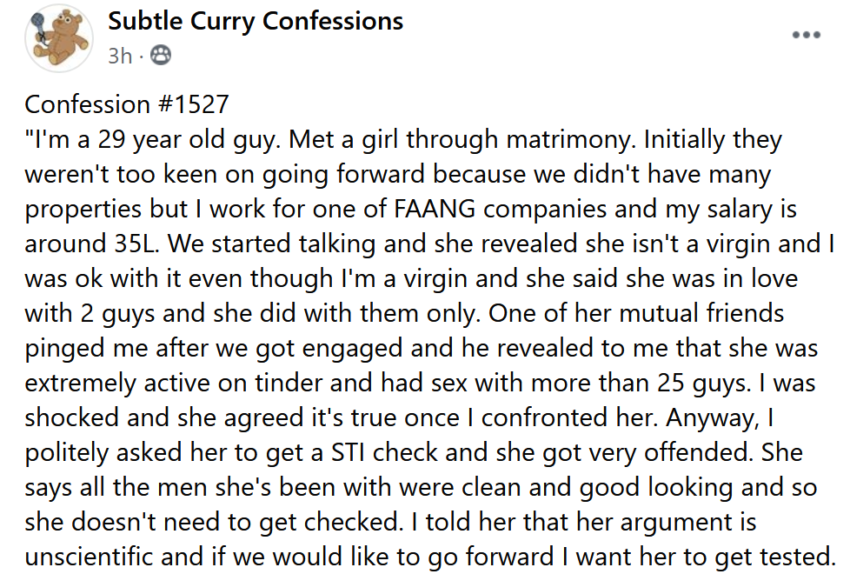 I’m a 29 year old guy. Met a girl through matrimony. Initially they weren’t too keen on going forward because we didn’t have many properties but I work for one of FAANG companies and my salary is around 35L. We started talking and she revealed she isn’t a virgin and I was ok with it even though I’m a virgin and she said she was in love with 2 guys and she did with them only. One of her mutual friends pinged me after we got engaged and he revealed to me that she was extremely active on tinder and had sex with more than 25 guys. I was shocked and she agreed it’s true once I confronted her. Anyway, I politely asked her to get a STI check and she got very offended. She says all the men she’s been with were clean and good looking and so she doesn’t need to get checked. I told her that her argument is unscientific and if we would like to go forward I want her to get tested. I also talked to my therapist who has more than 30 years of experience in psychology and she told me women like her have no ability to “pair bond” and it would be a huge mistake if I marry her. I’m also very uncomfortable thinking about doing anything physical with her. I don’t want to get any disease and I don’t even feel any sort of attraction to her anymore. Sexual compatibility is important right and she also lied about her partner count when I asked first. I told my parents to call off but they said their parents are asking for reasons why we said “no”. I don’t feel comfortable to tell them my reasons either, it’s just disgusting. Any advice to call it off? I also understand this group is extremely sensitive about men rejecting women with lots of sexual experience but please don’t make an argument like “what’s the difference between having sex with one guy for 20 times and 20 different guys”. You know that’s a false equivalence and a dishonest argument. I also think it’s a personal choice. If women can reject men based on things like salary or bank balance I think men also should have the right to reject women based on their sexual history. Thanks!
-Hyderabad

First of all, stop saying crap like “men also should have the right to reject women based on their sexual history.” We are born free and have the right to REJECT ANYONE FOR AND DAMN REASON. We don’t owe anything including an explanation. Using words like “men should have the right to….” is insulting to our gender. No need to beg!
Now back to your question, I have always considered arranged marriage a creepy affair. I know people who married despite never getting a chance to meet their partners one on one. I wonder what they could read about the person.
In you situation, the woman had multiple partners yet didn’t choose to marry them, and rather is considering a random stranger over an arranged marriage for reasons she and her family know better. There’s a hard chance of her being compatible with you.
It seems that as a virgin, you are desperate for a partner or maybe something more, but a failed marriage could be a huge cost to pay for that.
Personally, if I was at your place, I would suggest her family living in with the woman for a couple of years prior to marriage without any promises and liabilities and wait for us to judge compatibilities. But that’s me.
Oh sorry! Not unless the person presents a clear trustworthy report of a clear STI profile. I would happily present mine beforehand.
As for telling her parents about the rejection, say it straight with confidence and sans any excuses.
Now about