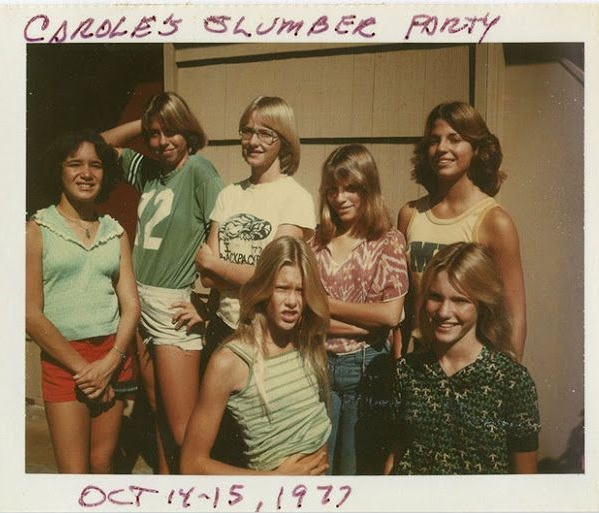 What should I wear today? The red dress or blue jeans? Or maybe the denim skirt?

Nowadays, women have a lot of choices regarding what clothes to wear out. But it hasn’t always been like this.
If you have a look at historic paintings or watch movies set in the 20th century, you will see all women wearing a similar kind of clothing, typically a long gown or dress.

So who has shaped today’s fashion?

The First Wave of Feminism

In the early 20th century and during the first wave of feminism, suffragettes fought for the women’s right to vote.
But to achieve their goals they did not only express themselves in words but also in fashion.
So it happened that Amelia Bloomer, one of the suffragettes, invented the “Bloomer-suit” consisting of a loose tunic over baggy trousers – controversial clothing for women given the times.

Famous fashion designer and feminist Coco Chanel took this to the next level in the 1920s.
Her designs were called ‘casual chic’. 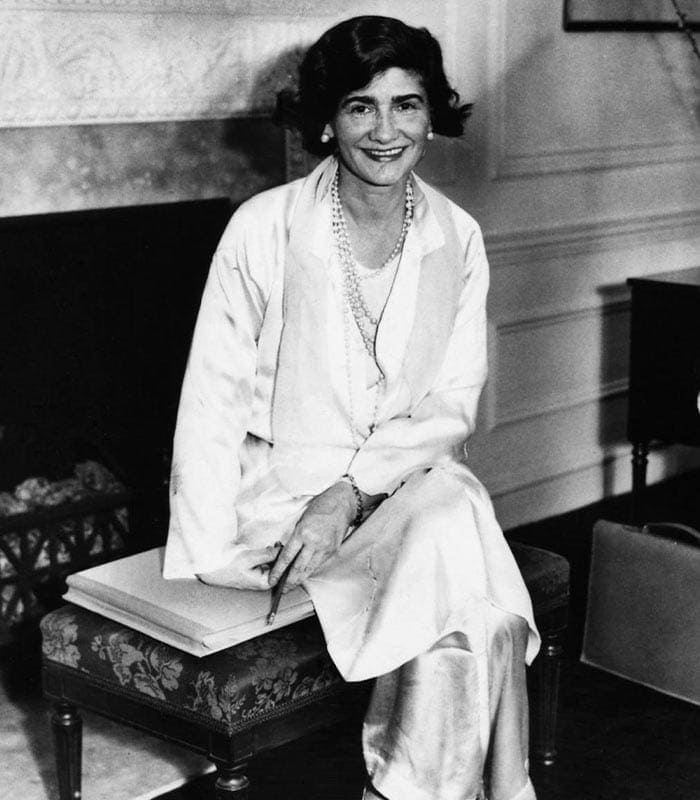 She got rid of corsets and the uncomfortable waistline entirely, shortened the skirts, and brought skirt-suits as well as trousers for women into the market.

Bringing this masculinity into fashion was not only a fashionable matter but for many women a life-changing inspiration, as Coco Chanel’s statements “A woman who cuts her hair is about to change her life” shows.

In the 1930s, “Flappers” followed Chanel’s style. Trousers and skirt-suits were seen more and more in everyday life – even though criticism towards such clothing still existed.

Feminist Hollywood stars, like Katharine Hepburn and Marlene Dietrich, were fond of wearing masculine clothing and trousers as a statement of independence and modernity.

Marlene Dietrich underlined this with her words: “I dress for the image. Not for myself, not for the public, not for fashion, not for men”.

Katherine Hepburn went even further in saying: ” I have not lived as a woman. I have lived as a man. I’ve just done what I damn well wanted to and I’ve made enough money to support myself and ain’t afraid of being alone”.

It’s no surprise that she became an idol for many women during this time.
She was praised for giving women empowerment and confidence – as well as in the sense of fashion and in the business world, which was still run primarily by men during these times.

Later on, fashion designer Claire McCardell invented American sportswear for women, introducing jersey and denim to the women’s wardrobe.
And still to this day, these are popular fabrics in female fashion.

As women started to establish a taste in practical outfits, Bonnie Cashin introduced women’s boots – a type of footwear that was entirely new for women during this time and became popular very shortly.

The Second Wave of Feminism

In the 60s the world experienced a second wave of feminism. The younger generation was looking for a sense of freedom, which Mary Quaint brought to the women by introducing miniskirts and hot pants to the American market in 1964.

Although she had to deal with a lot of criticism for her controversial designs and got blamed for vulgarity, she countered back and told ‘The Guardian’ in 1967: “People call things vulgar when they are new to them”.
In her designs, she continued to express sexual freedom for women.

‘Cross-dressing’ became a keyword in the 70s when womenswear and menswear became interchangeable. Both genders wore high-waist pants, button-down shirts, and blazers. 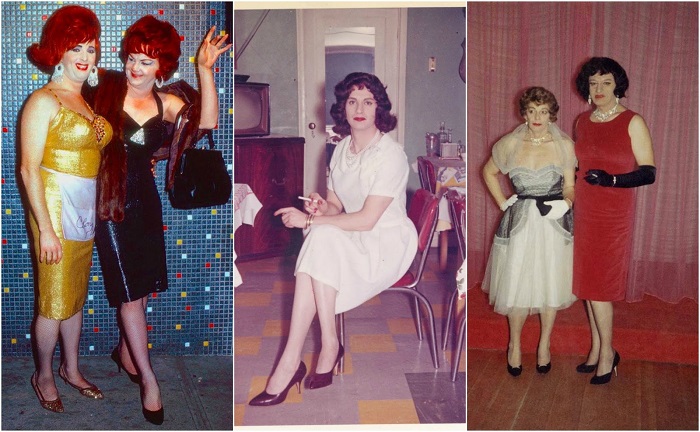 Due to her confidence, the Jamaican model and singer Grace Jones became an idol for many women. Jones was a feminist of colour, wearing masculine clothing and a short haircut.

The Third Wave of Feminism

The 90s encountered the third wave of feminism. During the grunge era, unisex clothes like flannel shirts and jeans became popular.

‘The Riot Grrrl Movement’ influenced the fashion scene when feminist women expressed themselves in punk music and fashion. 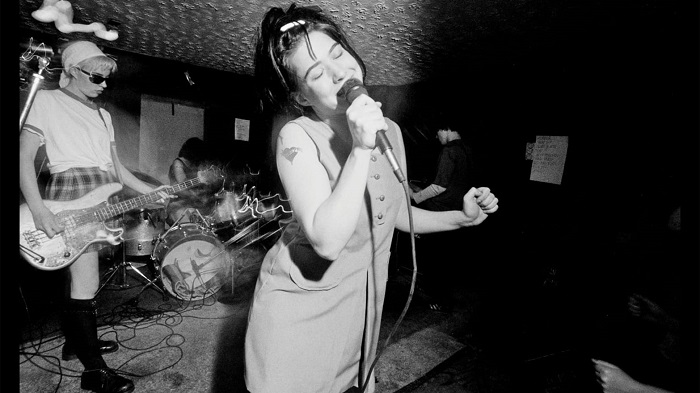 Kathleen Anna from ‘Bikini Kill’ noticed “It’s unexpected for women’s issues to be brought up in places other than women’s centres on college campuses or crisis places”.

This is why she made feminism a big part of her music and expressed herself in punky clothing.

The Fourth Wave of Feminism

The different styles that became normalized for women bring us pretty close to where we are now.
You could call the current times the fourth wave of feminism.

Although pants, masculine clothing in general, and even revealing clothes are socially accepted nowadays, women are still expected to dress in a certain way for some events and jobs.

For example, Hillary Clinton wore pants during her entire campaign in 2016 and got criticized for her ” lack of feminine clothing”. 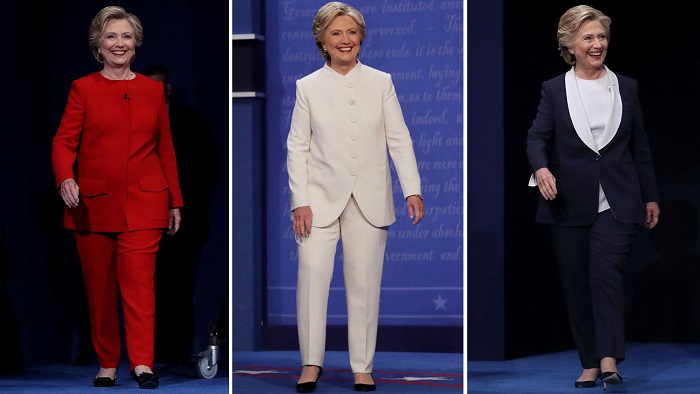 Similarly, celebrities are being put in the spotlight when leaving the house without make-up.

Therefore, more and more celebrities are wearing slogan-shirts to express themselves.

Supermodel Bella Hadid wore the slogan “The Future Is Female” on the runway and Hollywood-Star Jessica Chastain proudly wore the words “We Should All Be Feminists” on her chest.

Popular clothing chains like Forever21 and H&M follow this trend and make feminist slogans a part of fashion around the globe.

Today, women have a lot of freedom in their choice of clothes. Pants, revealing clothing, and unisex clothing are widely available.

As a woman I am proud, to wear pants that previous feminists pushed on the market, although they had to fight hard to convince the public!

I am proud to wear fabrics that once didn’t seem to be “ladylike” enough, though feminist designers believed in it!

I am proud to wear revealing clothing that was once rebellious and socially unacceptable!

But most of all, I am proud of the incredible women that allowed this to happen.
The women that were aiming for independence and change.
The feminist women that shaped today’s fashion and allow us to be in charge of what we want to wear and who we want to be!